Dance of Fools: The Awa Dance Festival in Tokushima, Japan 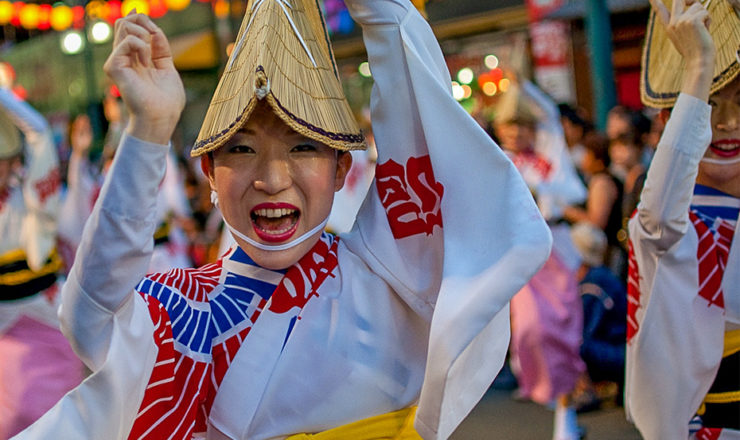 The Awa Dance Festival, also known as the Awa Odori Dance Festival, is the largest traditional festival in Tokushima Prefecture, Japan, and has over four hundred years of history. It is held in mid-August every year. Awa is the old administration name for Tokushima, and odori means dance. As a folk dance in the region, Awa odori originated from a Buddhist practice. It is generally believed that a collective dance style was added to a priestly dance to honor the spirits of ancestors, leading to today’s Awa odori.

The Awa Dance Festival is held as part of the Obon Festival, a major Japanese holiday. This year, festival will be held for four days, from 12 to 15 August. The main celebration starts around 6:00 p.m. in city centers and continues until 10:30 p.m. People dance in parks and stage areas and parade through the streets. Large crowds come from around the country to see and enjoy Awa Odori, which is also called “dance of fools” after old Tokushima saying:

The dancing fool and the watching fool are both fools, so why not dance?

At this time of year, over a thousand groups of choreographed dancers (ren) from around Japan register for the festival. Other non-ren dancers also gather to present voluntary performances. Spectators are also free to join the festivities. As such, Awa Odori can be better enjoyed through collective dance steps. Typically, men dance in a powerful style while women dance in a more graceful fashion.

To spur the excitement, ren dancers play hayashi, an essential part of the festival, with traditional musical instruments, such as with flutes, drums, kane gongs, and three-stringed shamisen lutes. This combination of flute and percussion instruments is called norimono. The kane player leads the group; flutes produce melody; drums provide a rhythmic base, signaling the start of the festival.

During the festival, visitors can enjoy Awa Odori performances on stages in city centers. The Awa Odori Kaikan is one of the main indoor stages, where outstanding groups present Awa Odori demonstrations. The most notable feature of the festival is that it encourages all people, not just ren dancers, to participate in the festival; people voluntarily establish and join related associations and promote the festival themselves, which have led to the festival’s success. To take part in the festival and have a chance to dance on stage, one can join the Niwaka Ren to learn choreography.