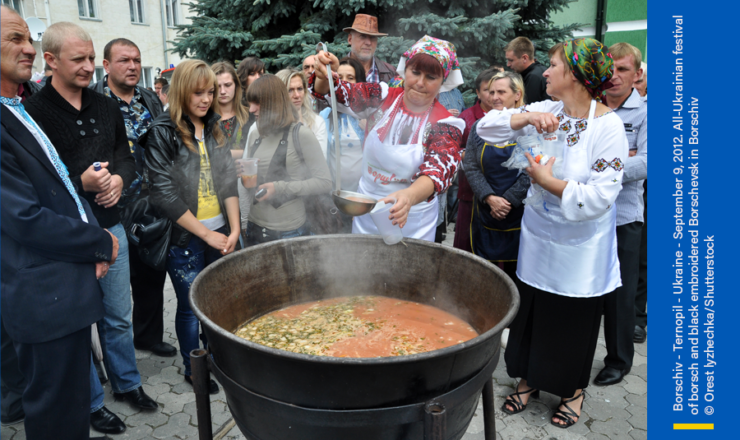 Ukrainian borscht – national version of borscht consumed in several countries of the region – is an integral part of Ukrainian family and community life. Festivals and cultural events are dedicated to it. In 2020, it was included in the national list of elements of intangible cultural heritage of Ukraine and was to be considered for inscription on the Representative List in the Committee’s 2023 cycle.

Due to the ongoing war and its negative impact on this tradition, Ukraine asked the Member States of the Committee to fast-track the examination of the nomination file for borscht to be inscribed on the List of Urgent Safeguarding as a case of extreme urgency, in accordance with the rules and procedures of the Convention. The Committee today approved this listing.

The List of Intangible Cultural Heritage in Need of Urgent Safeguarding aims at mobilizing attention in order to safeguard intangible cultural heritage whose viability is at risk despite the best efforts of the community or the State party. Inscribing an element helps stakeholders to undertake international cooperation and assistance to develop and implement a dedicated safeguarding action plan.

In its decision, the Intergovernmental Committee’s noted that

“the armed conflict has threatened the viability of the element. The displacement of people and bearers threatens the element, as people are unable not only to cook or grow local vegetables for borscht, but also to come together to practice the element, which undermines the social and cultural well-being of communities.”

The culture of borscht cooking has long been practiced and celebrated in all regions of Ukraine, with communities, families and restaurants developing their own versions of this traditional and popular dish, which is based on beetroot. It reflects local characteristics and products depending on the region. Variations of borscht can include mushrooms, fish or sweet peppers. Whether as part of a wedding meal, the focus of food-related competitions or as a driver of tourism, borscht is considered part of the fabric of Ukrainian society, cultural heritage, identity and tradition.

Borscht cooking is also practiced in communities in the broader region, and whilst the inscription recognizes the social and cultural importance of Borscht cooking amongst Ukrainians, an inscription of an element of intangible cultural heritage on a list of the UNESCO 2003 Convention for the safeguarding of the intangible cultural heritage does not imply exclusivity, nor ownership, of the heritage concerned. Borscht cooking joins four existing elements from Ukraine on the Elements on UNESCO Intangible Cultural Heritage Lists.

Since the beginning of the war in Ukraine, UNESCO has initiated a series of emergency measures in the fields of culture, education, as well as the protection of journalists, in accordance with UNESCO’s mandate.

This initiative of the Member States of the Intergovernmental Committee for the Safeguarding of the Intangible Cultural Heritage is consistent with this commitment of UNESCO in favor of populations affected by war.