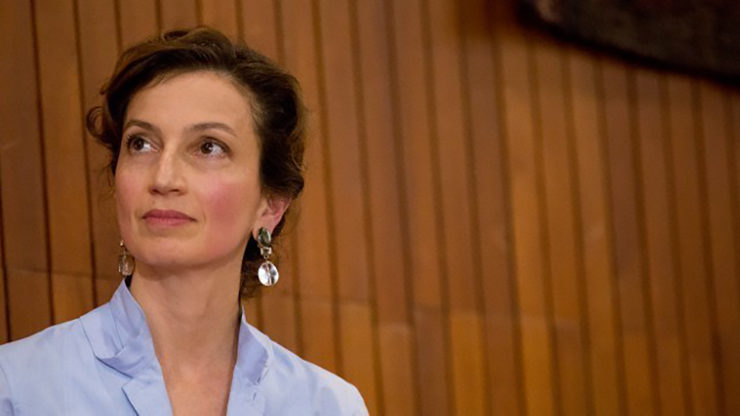 An 13 October, after the fifth round of voting, the fifty-eight members of UNESCO’s Executive Board nominated former French culture minister Audrey Azoulay as the new UNESCO Director-General. The decision surfaced a day after the United States and Israel had announced that they are discontinuing their membership in the agency. This means that Azoulay will assume the position of the outgoing UNESCO Director-General, Irina Bokova of Bulgaria, with heavier task of restoring the integrity and organizational credibility of UNESCO not only as the conscience of the United Nations but also as an agency leading the good fight against poverty, illiteracy, and degradation of the planet. She will take a leading role to help achieve the Seventeen Sustainable Development Goals laid out in the UN 2030 Agenda.

Born in 1972, Audrey Azoulay graduated from the Paris Institute of Political Studies and holds a diploma in business administration from Lancaster University. She served as a culture adviser to the former president of the French Republic Francois Hollande. In 2014, she launched the creation of a plan to protect endangered heritage. When she was appointed as French Minister of Culture and Communication two years later, she refined her mission of protecting endangered heritage in conflict zones, which lead into the Draft Resolution 2347 to the UN Security Council. The Resolution advances the thinking that protection of cultural heritage is a necessary act to realize peace and security. Furthermore, the Resolution sees culture as a source of stability and inclusion, a driver of reconciliation and resilience. The Resolution, recommended by Italy and France, was unanimously adopted on 24 March 2017. It is apparent in Azoulay’s track record that her work is consistent with the UN’s universal project of peace and democracy.

The newly nominated UNESCO Director-General also believes that education is a catalyst for development and gender equality. “Science and culture, through education,” she expresses in the vision statement attached to her candidacy, “help to emancipate individuals, thereby fighting obscurantism. Education is key to preventing identity politics and enabling a genuine openness to others.” Furthermore, she thinks of heritage as a symbolic and material value of democracy. Protecting an artifact of the past or the methods of creating such artifact is synonymous to surviving identity and culture. In her language, when heritage, both tangible and intangible, is designed as a basis of collective memory and common vision to imagine the future, people are able to respectfully recognize each other. Considering the technological changes of the world, she advocates for a strategic use of digital means to mobilize and promote safeguarding projects in partnership with international and regional initiatives.

On 10 November, Audrey Azoulay’s nomination as the new Director-General of UNESCO will be made official in Paris at the General Conference, a biennial gathering of all 195 UNESCO Member States. It is expected that her leadership will revitalize safeguarding and transmission programs in the ICH field.