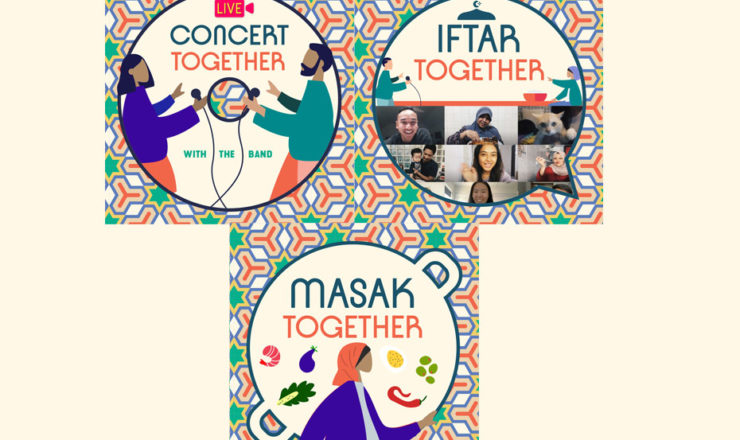 Ramadan is the ninth month on the Islamic calendar and the holiest month of the year for Muslims all over the world. During this period, Muslims fast (referred to as puasa in Malay) from sunrise to sunset every day throughout the month. Muslims will have their breakfast before sunrise (sahur) and they will break the fast after sunset (iftar).

Prior to the COVID-19 pandemic, Muslims in Singapore visited mosques for their daily prayers and were encouraged to take part in an extra session of night prayers known as terawih during Ramadan. Muslim families as well as Singaporeans would throng the streets of Geylang Serai and Jalan Bussorah to enjoy outdoor street markets selling a wide variety of Malay culinary delights, gifts, and clothes.

Due to the COVID-19 pandemic, however, mosques in Singapore are closed until further notice, and all Singaporeans are encouraged to stay at home. As a result, the Muslim community is unable to breakfasts together at the mosque and/or visit one another during Hari Raya Puasa, a celebration that marks the end of the fasting month.

In view of the above, the National Heritage Board of Singapore (NHB) and the Malay Heritage Centre (MHC) decided to collaborate on the #RamadanTogether campaign which seeks to connect the Muslim community through digital platforms and to educate the non-Muslim community on the intangible cultural heritage practices associated with Ramadan.

The month-long campaign comprises three key components: “Iftar Together,” which encourages Muslims to break the fast together online; “Masak Together,” which shares recipes on how to make traditional Hari Raya dishes at home; and “Concert Together,” which features “live” performances from local artists and arts groups.

To complement NHB’s digital offerings, MHC will also be producing a series of digital programs hosted on its social media platforms that feature community contributions. These include cooking and baking tutorials by well-known Malay personalities who will showcase family recipes for breaking the fast as well as traditional Hari Raya dishes. Videos and animations on traditional Hari Raya attire such as the baju kurung (a traditional loose-fitting outfit) and the kebaya (a traditional women’s dress) will also be produced.

MHC’s #OnXOnRayaFest campaign will also involve a callout to members of the public to contribute user-generated content on how Hari Raya was celebrated in the past and how it is celebrated during these COVID-19 times to document the impact of the pandemic on intangible cultural heritage as practiced in the homes of the Muslim community in Singapore. Photo submissions from members of the public will be put up on MHC’s social media platforms and creative submissions will stand a chance to win attractive merchandise.

In addition, as part of its ongoing education and outreach efforts, MHC will also provide a glossary of terms associated with Ramadan and Hari Raya Puasa, offer bite-sized information focusing on Malay heritage and culture, and share traditional pantun (rhyming quatrains) greetings. MHC will also be working with local arts groups to produce Hari Raya music videos that will be filmed from home, to reach out to the community and lift up their spirits during the COVID-19 period.