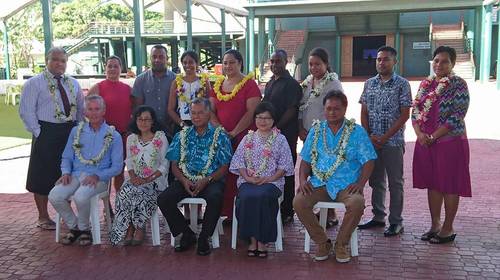 UNESCO supported two important workshops organized by World Intellectual Property Organisation (WIPO) in cooperation with the Cook Islands Ministry of Cultural Development, as a resource agency. The workshops were a follow-up to the SAMOA Pathway Outcome of the 3rd International Conference on SIDS (Samoa, 2014) and provided an opportunity for UNESCO to share information on the progress in UNESCO’s Culture Programme and its role in copyright development in Pacific SIDS. The first workshop was attended by the decision makers on copyright and development from Pacific island states (23 – 25 January 2017), and the other one was a National Workshop on Copyright and Related Rights for Creators (26 – 27 January 2017).

The objective of the sub-regional workshop was to provide Pacific delegates with the opportunity to share information on the progress in the area of the copyright systems in their respective countries. The delegates from nine Pacific island states (Cook Islands, Fiji, Kiribati, Nauru, PNG, Samoa, Solomon Islands, Tonga, Tuvalu, and Vanuatu) attended the workshop.

In his opening remarks, Hon. H. Puna, Prime Minister of the Cook Islands talked about the goals of the Cook Islands’ National Sustainable Development Plan 2016-2020 on culture, history, and heritage and highlighted the important role the copyright system can play for promoting creative talents and adding value to cultural products. He also introduced the national legislation on traditional knowledge that was adopted adoption as well as the country’s acceptance of the UNESCO Convention for the Safeguarding of the Intangible Cultural Heritage last year and underlined the importance of taking a combined approach with an ultimate goal of ensuring a certain level of control on cultural heritage that belongs to indigenous communities while supporting the growth of cultural and creative industries by capitalizing on their heritage.

The presentations from the UNESCO Office in Apia provided information on the historical background on the endeavor of the international community for the protection of traditional knowledge (TK) and traditional cultural expressions (TCE), or intangible cultural heritage (ICH) dating back to the 1980s. This issue has currently been addressed within the framework of the UNESCO 2003 Convention for the Safeguarding of the Intangible Cultural Heritage as well as the WIPO Intergovernmental Committee on IP and the Genetic Resources, TK, and Folklore that met for the first time in 2001. As for UNESCO, eleven Pacific SIDS are now signatories of the ICH Convention, which provides a practical and workable system for ICH safeguarding.

This sub-regional workshop was followed by the National Workshop on Copyright and Related Rights for Creators. The workshop brought together some twenty writers and composers, government officials, and other stakeholders of the Cook Islands. The Cook Islands Music Association (CIMA) that has been playing a pioneering role in the copyright development also attended.

UNESCO made a presentation on its normative actions focusing on the ICH Convention, the Convention on the Protection and Promotion of the Diversity of Cultural Expressions, and the Recommendation of the Status of Artists. These normative instruments provide international frameworks for developing a pro-culture policy for sustainable development. UNESCO encouraged the Cook Islands to join the Cultural Diversity Convention and promoted the Recommendations of the Status of Artists, which supports the transnational mobility, social protections of artists, and the freedom of artistic expression.

Both workshops concluded with agreement on the outcome recommendations. UNESCO will continue to provide Pacific SIDS with technical assistance and policy support to assist them with implementing the follow-up actions in the recommendations.