Communities taking their deity back to where it belongs 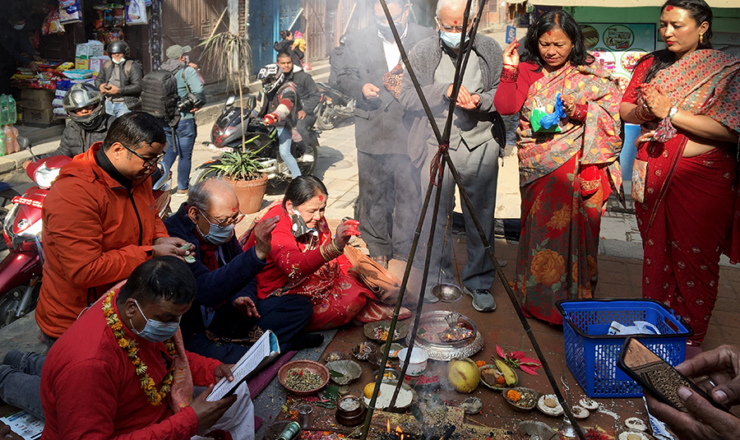 Community members of the temple performing the rituals to welcome back in the stolen statue in the temple of LaxmiNarayan. © Monalisa Maharjan

On 4th December 2021, the locals of Patko locality in Patan were busy decorating temple of LaxmiNarayan and arranging materials for the rituals from early morning. This was not any ordinary Saturday or ritual. Many people have never seen this kind of event. On this day the original statue of LaxmiNarayan – an androgynous statue, was going to be reinstated in its temple after nearly forty years.

This statue was stolen in 1984 and was found in the Dallas Museum of Arts. With the help of the activists, diplomats, Nepal Heritage Recovery Campaign the return of this statue to Nepal and then back to the community was possible. Many statues and artifacts from the temples have been stolen from Nepal, which still continues till date. But this kind of getting back of the statue to where it belonged with this fanfare and media coverage was a first one. Even the stolen objects get back to the country then it was a normal procedure to keep that in the museum for safekeeping.

When the statue of LaxmiNarayan was stolen, the custodians of the temple made a replica of it and stated to worship a new one. Many people didn’t even have the memory of the original ones. Some of then could not just understand why the jwelleries of the deity does not perfect fit. The original statue was returned on a palanquin with music from the Patan Museum to the temple. The custodians of the temple performed rituals to statue and welcomed back to its place. Then during the rituals the jewelries perfectly fit the real statue.

Following the example of LaxmiNarayan statue, another statue of deity Padmapani Lokeshwor was returned to the Monastery in Naxal of Kathmandu. The heritage activist found the location of this statue that has been missing from the monastery for several years. This statue has been with the Chhauni Museum in Kathmandu.

The locals and heritage activists took back this statue to the Monastery in a carriage followed by traditional music and gurju ya paltan (traditional army band). The carriage was followed by the procession of people in traditional attire. On that monastery also the elaborate rituals were performed to welcome back the deity.

In 1980 from the stone fountain of Tanga Hiti in Patan, a statue of UmaMahesheshor.

This statue was returned back to Nepal by New York Metropolitan Museum on 2018 August. As many other stolen statues which were found and returned back were kept in the Museum, this one was with Chhauni Museum. This statue was also taken back to the place where it belonged on 7th February 2022. The locals went to bring back their deity with fanfare as in the other statues.

Heritage in Nepal is a living heritage where people have everyday connection with temples, squares, platforms and waterspouts in form rituals, festivities, dances and music. When the statues or artifacts get stolen, they are not stealing the objects but also the rituals and sentiments associated with it. Finally, it seem the statues are slowly returning back to the place where it belonged in Nepal. The excitements and joy could be seen in the face of people when the statues were placed back the original place.

When the communities are now able to take back their statues, so more statues will be going in future. So it has became urgent that the government prepare a proper guidelines on reinstalling of the statues and artifacts, as well as safety and integrity of objects.