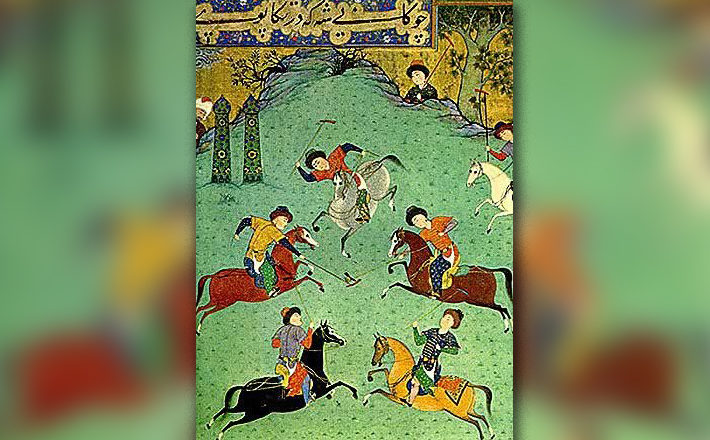 The horse, a special animal that, ever since the beginning of civilization, has been tamed by humans. The creature has accompanied humans, from carrying loads to partaking in ceremonies. There’s not much information available on how exactly this animal was tamed, but historical evidence such as paintings discovered on the walls of caves and the pottery found in the very first human’s accommodations confirms that it was domesticated first by the Aryans and brought to the plateau of Persia. A place in which this creature has gone through many ups and downs, taken from carrying stuff for humans to becoming a playmate for him in such an ancient game like polo (chogan) with a significant role. And the presence of Turkmen horses, which are considered one of the best breeds in the world, has not been ineffective in advancing these events.

The connection between humans and horses dates back to the Neolithic Era, and ever since men tamed horses, the essence of the value of these creatures has penetrated into the beliefs of the ancient people of Persia. Horses included in such a place that they would be sacrificed to the gods of ancient Persia and India. This value could be seen in the Zoroastrian’s book of Avesta, the epics, mythos, and legends in Shahnameh, and the poetry book of Ferdowsi, the great Persian poet. Names mentioned in the book of Avesta generally mean “the owner of the horse.” Horses were so sacred that they were said to carry the chariots of the gods of ancient Persia and India.

With the technology in the hands of the ancient people, many things would not have been possible without the presence of animals such as horses, cows, or camels. In the meantime, on the one hand, because of horses’ value, and on the other hand, for its agility, strength, high speed, and loyalty, the horse could be a human helper. As history says: The Parthians did not separate their bows and horses only in their dreams, and among the Achaemenids, the horse has been their friend and helper since childhood. As the historical evidence confirms, the first Persian people to have an army on horseback were the Achaemenids, who were called Arteshtaran, the aristocrats who had been trained since childhood.

In the Parthians period, horseback riding was the favorite sport of the royal families. During the Sassanid period, they sided with the farmers and the traders. During the Samanid period, horses were sold in the bazaar of Khorasan as an intelligent animal, which its use in military units, Chaparkhaneh (in terms of posting offices), and carriages increased significantly.

In ancient Persia, due to the power and speed of these animals, they could be used in many places to send messages and letters, they were used as Chapar’s horses who would only take messages and bring back the response. On the battlefield, they accompanied the cavalry and were used at banquets and military ceremonies. With all that, one question is left to answer:

Why was the role of horses in playing chogan as necessary as humans were?

Chogan (polo), as an aristocratic game played in the Safavid court, was a way for the Safavid kings to communicate with the people. The sport was popular among the people, and people used every opportunity to hold this game. To answer the question of why the horse’s role in chogan is as prominent as the role of man, it can be said that it is due to the picture of this animal captured in the minds of people and kings for centuries.

The superiority of the Turkmen horse breeding, on the one hand, and on the other hand, its role in the religious beliefs, and the powerful reality of this animal in traveling distances, and accepting the fact that it has been with man throughout history, could be a reason for humans, to share it in wars and travels, and now to share it in entertainment and joy so that he could once again meet his need for a sense of constant companionship.