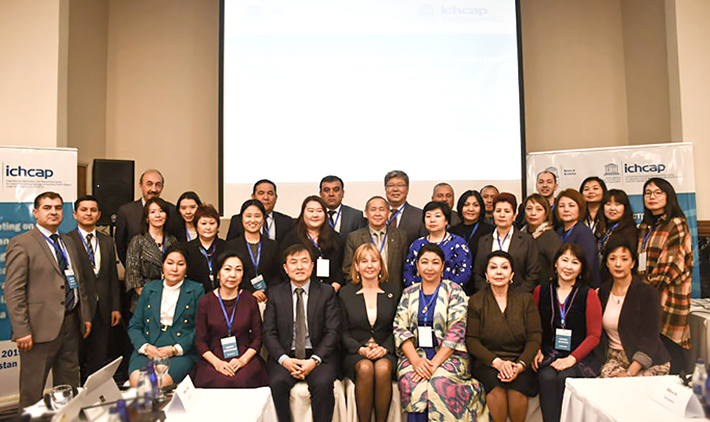 The ninth subregional meeting for Central Asia brought together staff from the government and education institutions of the 4 Central Asian states (Kazakhstan, Kyrgyzstan, Tajikistan, Uzbekistan) and culture/education professionals from the UNESCO Office in Tashkent, UNESCO-UNEVOC and International Institute for Central Asian Studies (IICAS) to discuss vocational education policies and practices for ICH safeguarding in the respective states as well as possible cooperation projects in the future.

The topic of this year’s meeting was Technical Vocational Education and Training for Intangible Cultural Heritage Promotion. The term “technical vocational education and training” used by UNESCO refers to education that is directly connected to work, conducted as part of the regular curriculum or extra-curricular activities at schools and other education institutions. Such education in the field of ICH not only impacts the livelihoods of practitioners, but also the viability and revitalization of ICH elements.

The meeting began with a keynote speech from the UNESCO Almaty Office, titled “New Priorities and Approaches in UNESCO’s ICH Safeguarding”. This was followed by presentations on five areas and working level meetings.

The first area was ICH safeguarding within formal and informal education, in which ICHCAP, UNESCO-UNEVOC and the UNESCO Almaty Office presented their strategic approaches. The second and third areas are Integrating ICH into education and Information and knowledge sharing, respectively. Case studies from Central Asia related to the integration of ICH into existing education systems were discussed with perspectives from both education professionals and ICH experts.

The fourth area was Cooperation in ICH vocational education information sharing, where participants worked to establish future tasks and their justifications as well as action plans for each stage.

The fifth area was the future of the Central Asian ICH Safeguarding Cooperation Network, which reviewed the cooperation projects between ICHCAP and Central Asian states and discuss the direction for future cooperation such as information sharing on ICH festivals in the Silk Road regions.

The ICHCAP has been devising and implementing measures to safeguard intangible cultural heritage in Central Asia over the past decade with network meetings, workshops and joint projects (inventorying, video documentation, book publication, etc.) Such efforts have led to achievements including the establishment of intangible cultural heritage committees and joining the UNESCO Convention on the Safeguarding of Intangible Cultural Heritage in the respective states. ICHCAP will continue to identify common issues and promote heritage transmission activities in the region.