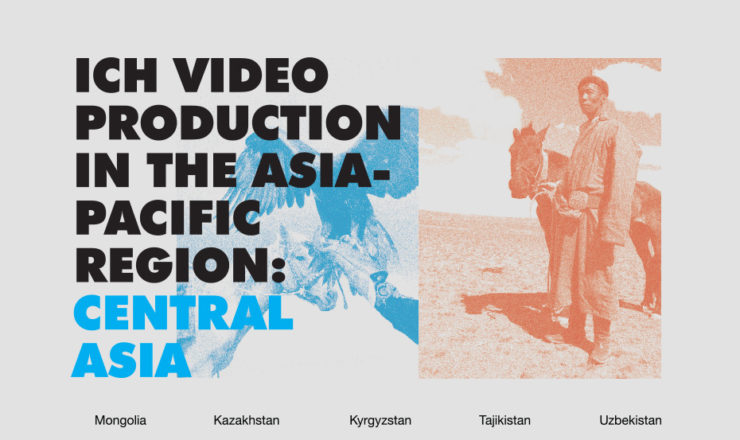 The 2018 Central Asian ICH Film Festival will be held from 29 to 31 August 2018 at the Mongolian Art Gallery in Ulaanbaatar, Mongolia. Organized by ICHCAP and hosted by the Foundation for the Protection of Natural and Cultural Heritage (FPNCH) in Mongolia, the event will feature about fifteen films and one hundred photos on ICH from five countries—Kyrgyzstan, Tajikistan, Uzbekistan, Kazakhstan, and Mongolia. The films and photos were gathered and created as the official outcome of ICHCAP’s Central Asian ICH video documentation project that started in 2015 in cooperation with each country.

The opening ceremony will begin at 4:00 pm on 29 August, featuring a film screening and the signing of Memorandum of Understanding by the Korea Educational Broadcasting System (EBS), the Mongolian National Broadcaster (MNB), ICHCAP, and FPNCH for the local distribution of the exhibited videos. The ceremony will also be attended by representatives from the Mongolian Ministry of Education, Culture, Science and Sports; Central Asian Embassies in Mongolia; and the UNESCO Beijing Office.

During the exhibition period, various events will take place across Ulaanbaatar, adding to the festive atmosphere. On 30 August, ICH Films at Schools will be screened at the Russian-Mongolian Secondary School No.3, during which films on Central Asian ICH will be viewed and discussed by students and the public. The Central Asian Ambassadors to Mongolia will tell stories about their ICH, which are featured in the films. A film screening event is also scheduled for 3 September, the first day of a new semester, at four UNESCO-associated schools in Ulaanbaatar.

On 31 August, a thematic conference will be held on how to use ICH video content at schools, with participation of education and video experts. The conference participants will discuss how to use ICHCAP’s videos at schools as well as ICH videos to be produced in the future. EBS will present a case study on ICH video documentation. ICHCAP will continue its efforts to raise visibility and awareness of ICH based on discussions among experts at the conference.

ICHCAP initiated the ICH video documentation project in cooperation with ICH experts, communities, and NGOs in related countries to promote the visibility and importance of ICH and its safeguarding among the general public and the youth. The first part of the project, which was conducted from 2015 to 2017, secured fifty videos (ten videos from each country) on ICH of four Central Asian countries and Mongolia. Anticipated to be complete in 2019, the second series of the project is currently underway involving eight Southeast Asian countries.