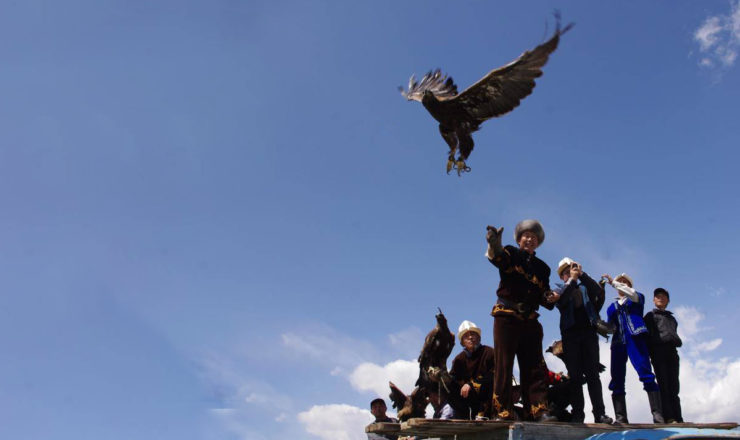 The International Association for Falconry and Conservation of Birds of Prey (IAF) will hold its 48th Annual Council of Delegates Meeting in Cholpon-Ata, Kyrgyzstan from 3 to 9 September 2017. The meeting will be held at the invitation of the Salburun Federation, which organizes the World Nomad Games with the support of the Directorate for National Sports at the Kyrgyz State Agency for Youth, Physical Culture and Sports.

An international conference on the conservation of the endangered Saker falcon (Falcon cherrug) will be held on 6 and 7 September 2017; expert speakers coming from across the geographical range of this culturally important specie will attend. To be held at the Ruh Ordo Cultural Centre in Cholpon-Ata, the conference will build on the outcomes of two previous conferences held in Abu Dhabi in 2016 and in April this year. It aims to address illegal trade and support sustainable legal trade. Details of the conference can be accessed through iafmeet2017.com/saker- conference (available in Russian, English, and Chinese). The week’s program includes activities celebrating Kyrgyz traditions, falconry, and the wider hunting heritage of Central Asia.

Falconry was added to the Representative List as a multi-national nomination in 2010. It was the culmination of more than six years of work by eleven nations. Led by authorities in the United Arab Emirates, the other countries were Belgium, the Czech Republic, France, Korea, Qatar, Saudi Arabia, Syria, Mongolia, Morocco, and Spain. Contributing international NGOs included the IAF, the International Council for Game and Wildlife Conservation, the Falconry Heritage Trust, and the Archives of Falconry. In addition, many individuals shared their time and expertise. It was the largest nomination in the history of the UNESCO Convention, and the inscription has since been extended to include Austria, Germany, Hungary, Italy, Kazakhstan, Pakistan, and Portugal.