Celebrating Festivals During a Global Pandemic 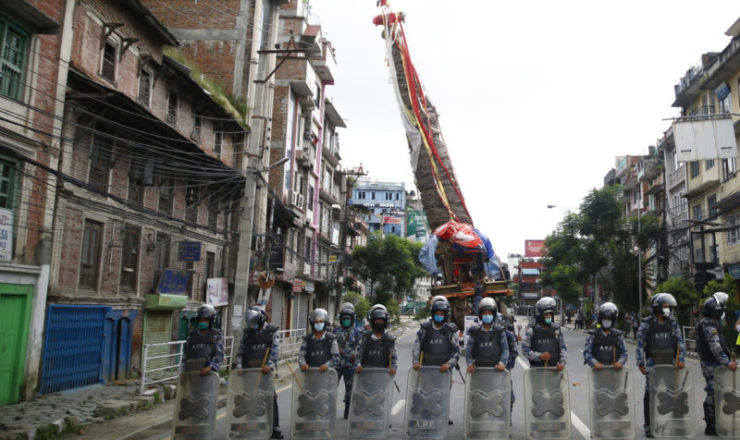 Nepal was famously referred to as “the land where there are nearly as many temples as houses and as many idols as inhabitants” by Sir William Kirkpatrick in his book Account of the mission to Nepaul in 1811 CE. This quote holds testimony to the numerous festivals celebrated throughout the year until today to commemorate these idols and temples. Since the seventh century CE, one such ancient festival has had continuity to relieve Kathmandu Valley from a long drought. The god being appeased in this festival was Matsyendranath, the god of rain, from which the festival received its name Rato Matsyendranath Jatra.

According to legend, the drought was relieved by bringing a Matsyendranath from Kamarup-Kamakhya (now in east India). The king sent his team—the priest Bandhudatta, a farmer, and the serpent king Karkotaka. The entourage returned successfully and entered the valley through Bungamati, where the locals greeted them with much adoration and built a temple for the serpent king to reside. However, being from Patan, the farmer insisted on having the residence of the deity at Patan too. Since then, the festival has been celebrated in Patan and Bugamati without interruption.

This festival is celebrated just before the monsoon season (mid-April to May) as a harbinger of the rains. The festivity extends over a month and is the longest among the many festivals Nepalis celebrate. Astrologers are consulted for the events involved in this festival. The local community constructs an elaborate eighteen-meter-tall wooden chariot, which is assembled and dismantled annually. The deity is placed in the chariot on a throne, and the indigenous inhabitants of Kathmandu Valley pull the chariot around Patan. As the chariot rests at various locations, locals venerate the deity, offering incenses, flowers, and other items. Some people light oil lamps to ask for the general well-being of their families. The priest escorting the deity inside the chariot hands out flowers and fruit to devotees. The light from the lamps makes the chariot glow. In the evening, people invite extended families and friends and indulge in a feast of traditional food and drinks and merrymaking. After completing the tour, the deity is carried in a palanquin to its second home at Bungamati.

This year, the global pandemic changed the events of this festival. The government, rightly prioritizing citizens’ health, requested the organizing communities to cancel the festival. However, the organizers were keen to celebrate at least a low-key festival because the initial processes had already begun. Furthermore, they opined that the festival was celebrated to overcome a disaster in the past, so it should continue to avoid further tragedies. The public, impatient with the chariot festival’s delay, forcefully started pulling the chariot, disregarding social-distancing measures ordered by the state. The sight of a large mob would entice the police to use force to disperse the crowd, leading to a violent clash. The organizing committee decided to make a symbolic movement of the chariot. All other festival activities were canceled, so a ritual will be conducted to ask the god for forgiveness for the mishaps of the festival.

This is a very unpleasant situation, which could be handled better by the state. A similar chariot festival in Kathmandu, Kumari Jatra, which falls around August, was not celebrated on a joint decision of the state and the organizers. However, at Patan, the situation was slightly different; the initial rituals had already commenced before COVID 19. The government should have regarded the people’s commitment to providing continuity to ICH even during such times of crisis.

Nepal is known for having more festivals than the number of days in a year. If the state had been more diplomatic, it could have set an example to the world by celebrating all festivals in the presence of only the concerned people and authorities while broadcasting a live telecast for people all over Nepal and globally. With such negligence by the state, festivals and other ICH of a country can be lost.