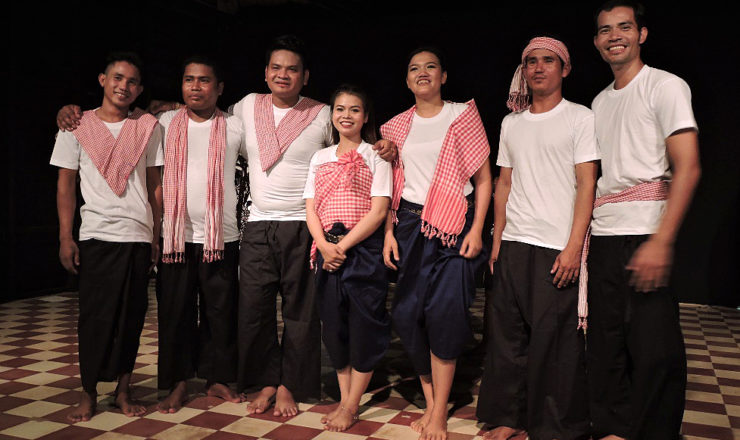 Cambodian Living Arts has initiated a music residency to give a significant opportunity to Cambodian traditional musicians in developing their creative work. The music residency is expected to be spent in any location within Cambodia, where they can find inspiration to create a new work.

Song Seng, the Heritage Hub Manager who is also managing this project, said, “Beyond the new context and environment inspiring the musician to create new work, this opportunity opens up chances for them to collaborate with other local musicians. In particular, Siem Reap artists and audience are likely to benefit from this project.”

Phan Chamroeun, a Cambodian traditional musician based in Phnom Penh, was invited to Siem Reap for this music residency from 6 to 23 July 2017. Chamroeun specializes in Cambodian string instruments, Tro Sao and Tro Ou (Cambodian fiddle). In Siem Reap, he worked with six other Cambodian musicians from Siem Reap and Battambang. During his first week in Siem Reap, he began working under the mentorship of Dr. Chinary Ung who moved from Cambodia to the United States in 1964 and became the first American to win the University of Louisville Grawemeyer Award for musical composition.

After two weeks, Phan Chamroeun alongside six other musicians composed eight musical compositions to be rendered by their traditional musical instruments. They used various types of Cambodian wind instruments such as kloy, sralai, and pei or/pei bobos; percussion instruments such as skor (drum), samphor, roneat aek, saingna, gongs; string instruments such as tro sao, tro ou, khim, pin (Cambodian harp), chapei dang veng (Cambodian long-neck guitar); and other sound materials such as cow bells. All eight compositions speak of the journey of music—from its birth to its living presence in countryside. Chamroeun said, “This is new music and it compels a new style of performance. All instruments we use are traditional, but the melody we create and the way we perform are completely new.”

In the evening of the 23 July in an intimate venue of Heritage Hub located in Wat Bo Monastery, about eighty people sat around the musicians; some on the raised platform and the rest on the cushioned floor. After the introduction speech of Heritage Hub Manager, the show started. It blew the audience away. Chok Kim Own, a traditional musician watching the live performance said, “This is my first time to see this new music played with traditional instruments. It made me my hair stand on end.” The Heritage Hub Manager said that the new compositions will be presented at REP Fest, a world music festival in Siem Reap from 27 to 29 October 2017.