Beldemchi Exhibited: From the Making of Women’s Traditional Clothing into a Field of Female Creativity 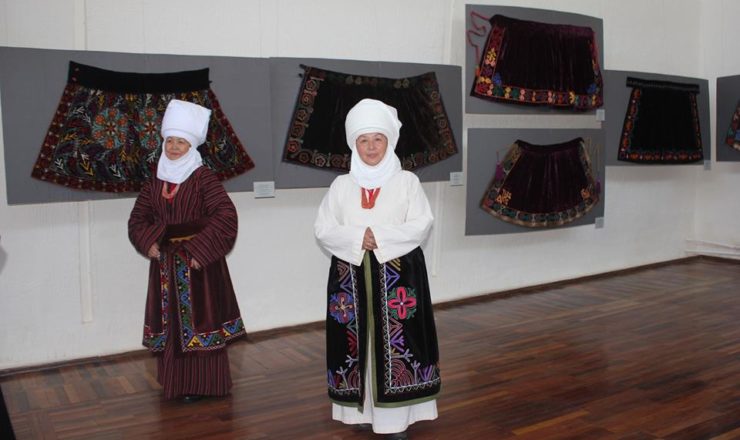 An exhibition of beldemchi was launched at the Gapar Aitiev Fine Arts Museum in Bishkek on 7 June 2017. The exhibition is still ongoing through the partnership of the Kiyiz Duino Foundation and the Gapar Aitiev Fine Arts Museum, an institution named after one of the first Soviet Kyrgyz artists who became a national artist of the Kyrgyz Soviet Socialist Republic in 1954. The exhibition displays more than forty items collected from state museums and private collections. It represents all regions of the country and various embroidery styles and techniques. The event is a sign of increasing interest in beldemchi in Kyrgyz society; renowned designers are already coming up with unique beldemchi design.

Beldemchi may be worn daily and in holidays or festive events. It is made up of velvet and silk adorned with embroidery. The embroidery could cover either the whole skirt or its edges. Viewed as a protective amulet against evil eye, jinxes, and other unpleasant troubles, it is also a determinant of a woman’s age, social status, region, and her artistic skills based on the composition, style, and quality of the embroidery since every woman is supposed to know how to make a beldemchi and its embroidery. The main base of beldemchi is a double-leaved swing skirt with wide and thick belt. Beldemchi has several regional differences. In the north where the winter season is cold and long, it is mainly a wraparound flared skirt from warm fabric with a thick band over the belt. In the south, beldemchi is a buttoned front open cut skirt.

The presentation of beldemchi at the exhibition displays how the making of traditional clothing for women has gradually turned into a field of rich female creativity. Notwithstanding, beldemchi has started to disappear from Kyrgyz everyday life, which may have been caused by the changing views and lifestyle. During the Soviet modernism in the 1960s, wearing beldemchi was a sign of backwardness and provincialism. Soon in the 1970s, it fell into disuse. However, elderly women in rural areas have kept wearing beldemchi until now.