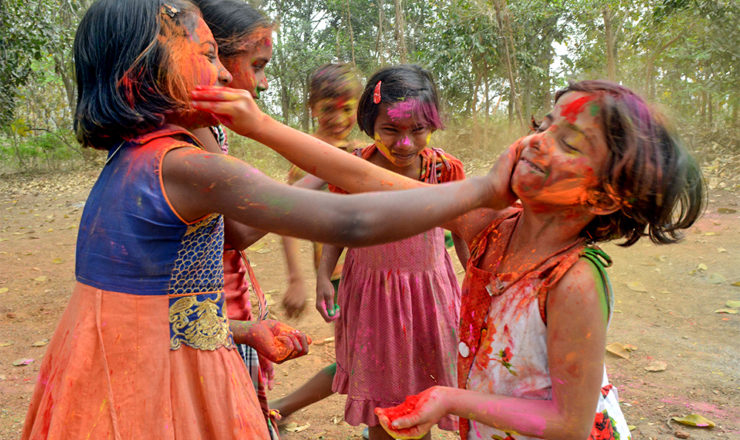 The Festival of Colors adorns the season of spring in north, east, and west India, and Nepal. While it is generally called Holi, and is a public holiday, it is celebrated as Basanta Utsav, or Dol, in the eastern Indian state of West Bengal. This is the biggest festival in the entire Indian sub-continent, transcending castes, communities, and religions to celebrate friendship and harmony. Incidentally, Mughal Emperor Akbar (1542 to 1605 CE) was the first Muslim ruler of India to play Holi with his Hindu subjects, striking a deep bond of faith and friendship with them.

People smear each other, even strangers, with different colors and sprinkle colored water, with pink, red, green, and yellow being the favorites. This results in villages, towns, and whole cities turning into a canvas of bright colors during the festivities. In many parts of north India, the celebrations, including religious rituals, begin a week ahead of the first full moon in the Hindu calendar month of Phalgun. The main festival, though, is on the full moon day.

Basanta Utsav has its own unique traditional charm with songs and dances playing a key role. It is one of the two main festivals celebrated at Visva Bharati University in Santiniketan, founded by poet-philosopher-educationist Rabindranath Tagore, India’s first Nobel laureate. During spring, with red Palash flowers in full bloom, the entire plateau landscape of Purulia acquires a bright red hue, casting an earthy romantic spell all around. The local communities traditionally celebrate the full moon night of Holi with songs and dance.

The social enterprise banglanatak dot com celebrates Basanta Utsav with local folk dances and songs in the sixty-acre campus of Nimdih Gandhi Ashram near Purulia and in the four-acre campus of a theater village at Tepantar near Santiniketan. This is a three-day and two-night event, full of color, music, folk performances, and traditional food. The event has evolved as a special destination among tourists worldwide.

banglanatak’s celebration is quite well known as FOLK HOLI. Guests wake up to the tunes of Baul songs. Herbal colors made from flower petals are used by the visitors who play Holi and dance to the beats of dhamsa and madal (drums). At night, men and women dance around bonfires that light up the sky to experience a surreal high.