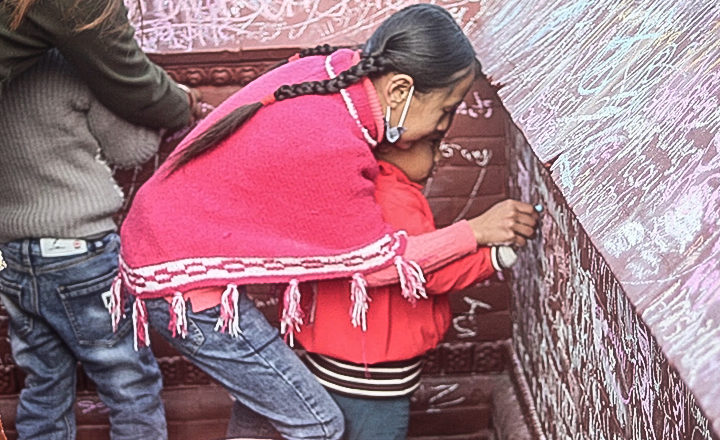 Sister teaching younger brother to write on the wall within the premise of temple. © Monalisa Maharjan

On 16 February 2021, Hindu Buddhist population of Nepal celebrated Basanta Panchami also known as Shree Panchami or Sarashwoti Puja. This day marks the arrival of spring that could be seen with blooming peach trees and other flowers in the neighborhood. This day falls on the fifth day of shukla pakshya (waxing moon phase) of the Nepali month of Magha. So literally basanta panchami means spring on the fifth day of waxing moon.

On this day, the special event is organized in an ancient palace—Hanumandhoka Durbar Square of Kathmandu known as Basanta Shrawan. According executive director of the Hanumandhoka Museum, Mr. Sandeep Khanal, this event has continued since the Malla period (1100 to 1769 CE). At that time and until the monarchy was abolished in 2008, the king used to attend the ceremony. Even though in the Malla period, the ceremony was not known as Basanta Shrawan, but the inscriptions mention about worshipping the god Kamadeva.

It is also celebrated as Saraswati Pooja, worshiping the goddess of knowledge, music, art, speech, wisdom, and learning. On this day, early morning parents are seen with the kids learning to write on the walls of temple of Goddess Sarashwoti with chalk. This is the symbolic meaning for asking blessing from Goddess Sarashwoti to read and write.  On this day many parents start initiating teaching alphabets to the kids. Schools around the country also organize events to worship goddess with various other entertainment programs.

Buddhist in Nepal believes Maha Manjushree arrived to Kathmandu from Lasha on this day. Manjushree is associated with the legends of formation of Kathmandu Valley. Manjushree came to worship the light in the lotus blooming at the center of lake. He could not reach there so, cut the hill (which is now believed to be chovar) with his sword and let water out of the lake. After the drainage of water settlement in the valley stated. Manjushree is one of the Bodhisattva that symbolizes wisdom and worshiped on this day. So along with the Sarashwori Temple, the temples of Manjushree are crowded as well.

As in other many festivals and rituals, this day is also an example of syncretism of Hinduism and Buddhism in Kathmandu Valley.