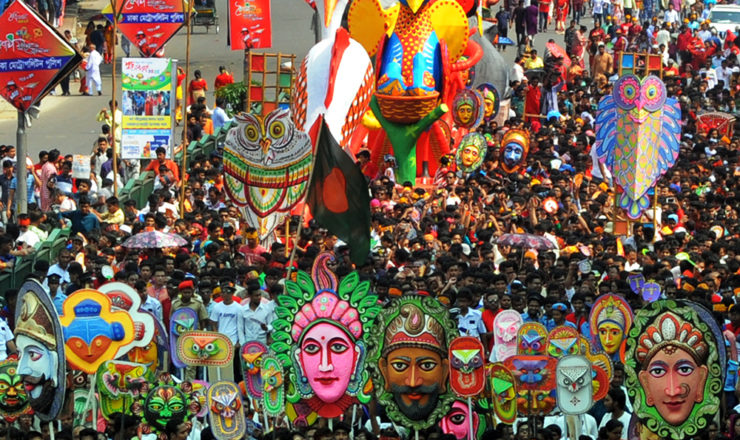 In the morning of 14 April Bangladesh ushered in Bangla New Year 1425 on Pahela Baishakh, the first day of the Bangla calendar, by bringing out Mangal Shovajatra, a UNESCO inscribed ICH element.

Clad in colorful punjabis and saris, people from all levels of society took part in Mangal Shovajatra parades hoping rid themselves of past evils and begin a better future.

The biggest and most attractive Mangal Shovajatra parade was at the Dhaka University in the capital city Dhaka. Hundreds of people carried student and faculty artworks representing evil and good. Similar processions were brought out in all districts.

Moreover, Baishakhi Mela (fair) displaying traditional food and artwork, cultural programs, and other events were held across the country.

At sunrise, thousands of people gathered at Ramna Batamul, the main venue of the Dhaka celebrations, where Chhayanaut, a cultural organization, has been holding an annual music soiree since 1965 to welcome the Bangla New Year.

On 14 April, the Bangladesh Shilpakala Academy held special programs at its open field in the afternoon and at the National Theatre Hall in the evening. The programs featured lathi khela (tricks with sticks), songs, dance, and acrobatics. The academy also held programs, in association with different organizations, at Mirpur, Uttara, and Old Dhaka in the morning.

In such events traditional troupes from Manikganj, Chapai Nawabganj, and other places displayed lathi khela and presented different folk music genres like gambhira. Renowned singers, dancers, and recitation artistes also performed at the program organized by the academy.

At the Bangbandhu International Conference Centre in Dhaka, over one thousand singers performed in a chorus in an open-air concert organized by the Shurer Dhara music school.

The Bangla Academy welcomed Bangla New Year through a program featuring a discussion and cultural show at Rabindra Chattar. The Bangla Academy also organized a five-day folklore workshop for folklore experts from Bangladesh, India, and the USA.

The Bangla year with its first month, Baishakh, was introduced during the rule of Mughal Emperor Akbar the Great (1542–c. 1605).

The day is a public holiday. All radio and TV channels air special programs while newspapers publish special supplements.

While Bengalis celebrate Pahela Baishakh, the hill communities of the Chittagong Hill Tracts celebrated Baisabi. Baisabi is a term formed by the first syllables of the Baisuk Tripura festival, Marma’s Sangrain, and the Biju Chakma festival or Tanchangya’s Bisu.