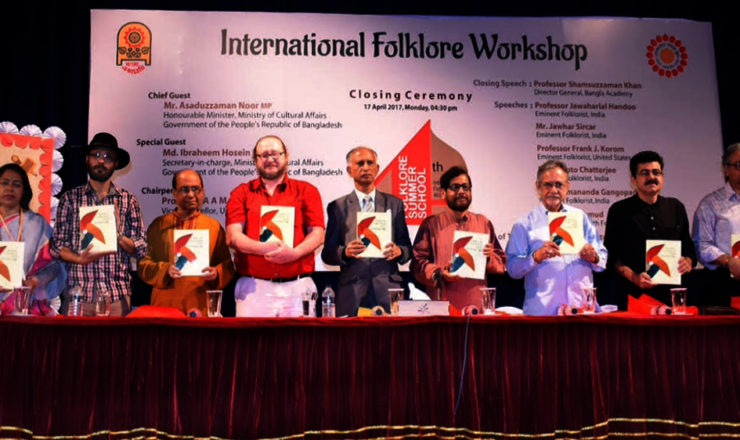 Bangla Academy, a Dhaka-based government agency dedicated to conducting research on Bangla language, culture, and history, organized the fourth Folklore Summer School with the participation of folklorists from Bangladesh, India, and USA. The five-day international workshop included classes and seminars on folklore research and a field trip.

This year’s event took place between April 13 and 17 with renowned local and foreign folklorists from around the world attending. Fifteen folklore researchers were awarded with certificates for successfully completing of the five-day folklore workshop.
The workshop also included other events. The Indian theatre troupe, Spectators, staged The Man of the Heart, a bilingual performance based on Fakir Lalon Shah, the most influential composer of the Baul tradition of Bengal. A local troupe also staged a traditional performing art form called jatrapala. Also included was a book launching for Social Change and Folklore, which featuring articles on the adaptation of folklore with changes in the society.

At the closing ceremony, the Bangla Academy announced that the government plans to open a folklore research institute for conducting research on folklore and intangible cultural heritage of Bangladesh. The institute, Monsur Uddin Folklore Institute of Bangladesh, will be named after Monsur Uddin, a pioneering folklorist of the country who collected many traditional songs and published those in his collection Haramoni.