Baab: An introduction to the Bhutanese Mask 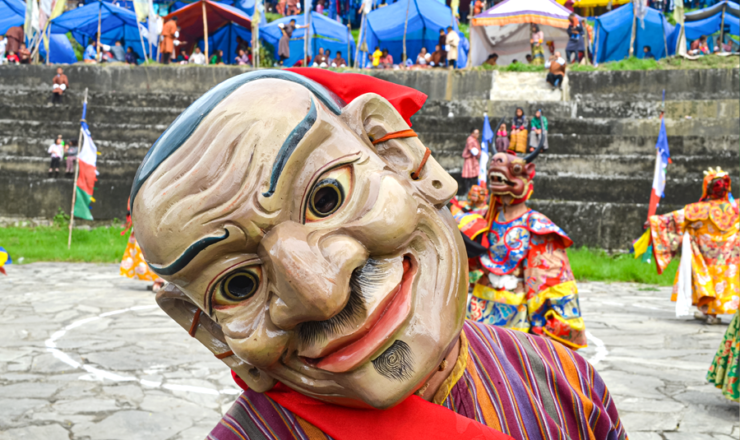 Colloquially, a mask often used in artistic mask dance performances to disguise or hide the original appearance is called “Baab” in Dzongkha (Bhutanese language) and in many local dialects. Baab is not only used for masquerade, but represents the appearance and expression of enlightened beings, celestial beings, guardian deities, and some extraordinary human beings who have helped to shape meaningful human life and promote harmonious living, which is why it is also referred to by the honorific title Zhal baab (face mask). Baab comes in many forms, appearances, complexions and with exceptional features that represent transcendent religious meanings and significance. Baab is the product of an art that requires several skills such as religious knowledge including proper proportions, biodiversity as the basic raw materials are woods, craftsmanship, blacksmithing in making tools and finally painting to give the mask the final structure.

According to historical texts, the Baab tradition and the performance of the mask dance, usually called Gar-cham, was introduced to Bhutan by Guru Padmasambava in the early 8 th century. Later, it was further developed by eminent Buddhist masters, especially Terton (discoverer of the hidden treasure) Pema Lingpa (1450-1521), who introduced many sacred mask dances and passed on the art of Baab making, which is still recognized and known today for his contribution to the enrichment of Bhutan’s indigenous art and culture. His exceptional art of Baab making and mask dances was later recognized by Zhabdrung Ngawang Namgyal (1594-1651), the head of the state government, and included as one of the of Bhutan’s intangible cultural heritage domain of arts and crafts. Thereafter, the Baab tradition was maintained and enjoyed increasing popularity after the heads of the state government, chief abbots and successive monarchs introduced and authorized other private religious institutions to organize Tshe-chu, Drub-chen, Chod-pa, Rab-ne, Me-wang, Ma-ni, Due-chod (mask dance festivals), etc. throughout the country. 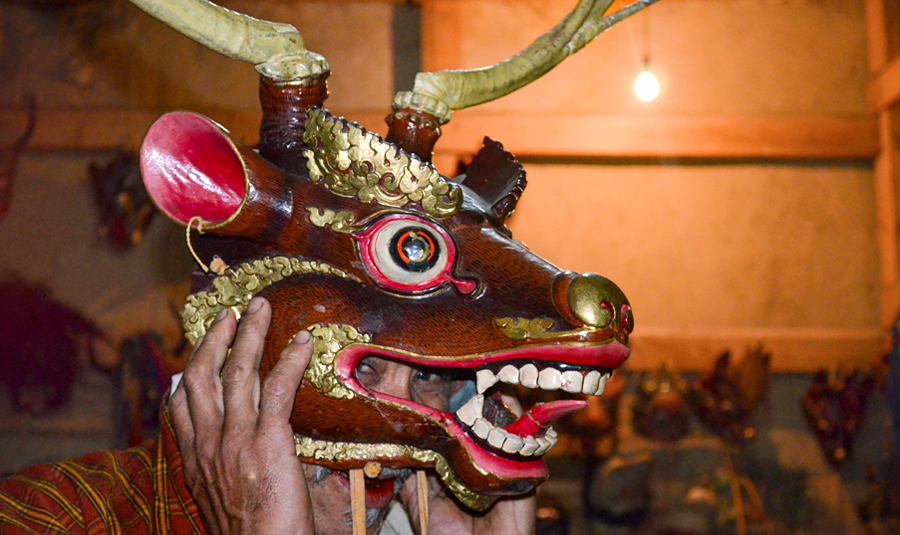 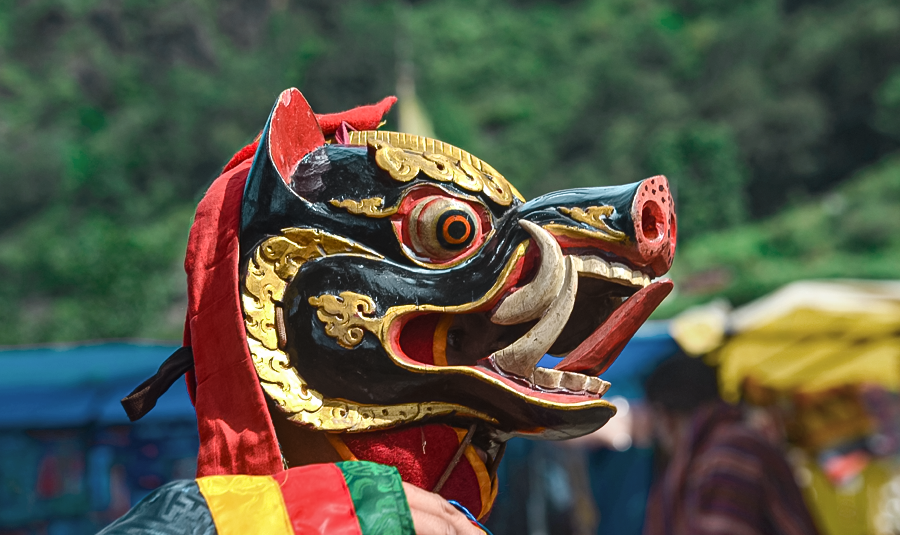 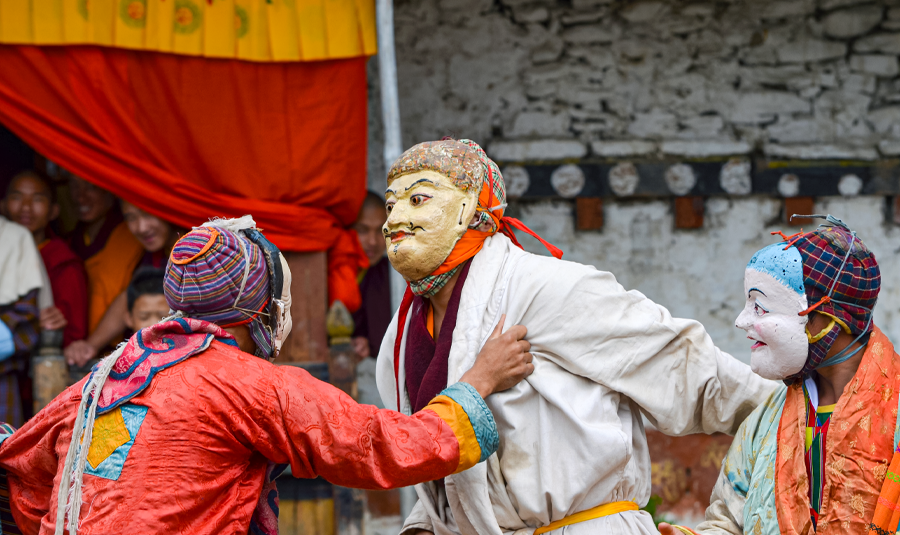 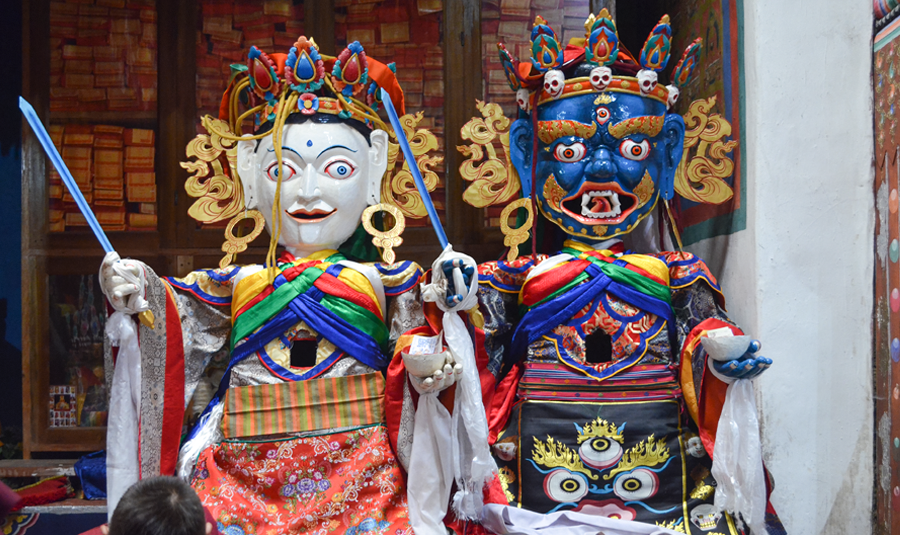 In general, the manifestations of Baab can be summarized as; Baab of deities and gods, animals and extraordinary human beings. It is firmly believed that the masks of the deities and gods manifest themselves in various emotional appearances such as; graceful, heroic, abominable, wrathful, compassionate, comical, wondrous, terrifying and petrifying. These expressions can also be divided into four categories: peaceful, inspiring, empowering and angry.

There are three types of masks made by Bhutanese artisans: Re baab (paper and cloth mask), Shing baab (wooden mask) and Sing-phye baab (mask made of a mixture of sawdust). However, the former two are ancient technical craft, while the latter is a newer product used mainly for commercial or decorative purposes. Traditionally, Baab are used only for the actual performance or kept as relics after the consecration ceremony has been performed by spiritual masters. It is believed that if these items are not blessed, they are as good as toys and are haunted by the spirits, causing harm to society.