Atlas of ICH in Uzbekistan Launched 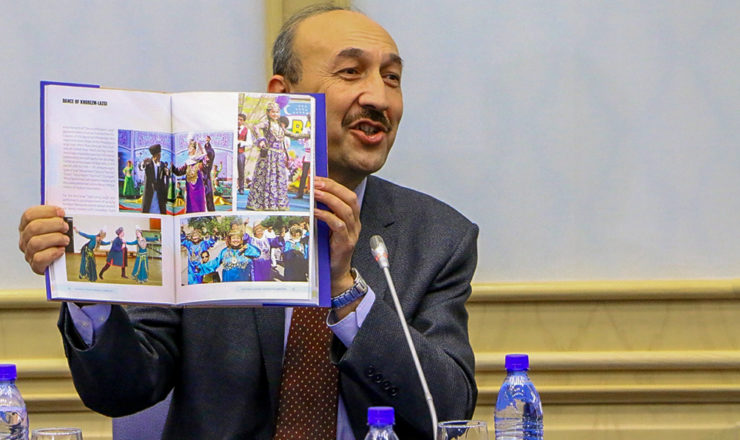 The brochure of intangible cultural heritage (ICH) elements of Uzbekistan—covering elements from the country’s national list of ICH—was published through the financial support of ICHCAP in 2016 and 2017. To have a more detailed presentation of the information on the elements included in the brochure, as well as to cover ICH elements from the regional lists, there was an need to publish a more comprehensive book in the form of an atlas. This resulted to the Uzbek–ICHCAP joint project, Publishing an ICH Promotional Book. It was carried out by ICHCAP, the Uzbekistan National Commission for UNESCO, and the International Institute for Central Asian Studies (IICAS), in collaboration with the Institute of Art and Culture of the Republic of Uzbekistan.

The project aimed to increase the visibility of ICH found in Uzbekistan as well as selected ICH elements beyond its borders, to create conditions pertaining to the use of information on ICH for educational purposes, and to assist in maintaining Uzbek ICH. In realizing the project, expeditions to different regions of the republic were organized in 2017, covering almost all the regions and the Republic of Karakalpakstan. Collected materials spoke about the current state of the target ICH elements to examine how those ICH elements have changed over time, how they are being adapted to real life, how they are distributed or transmitted, and who are bearing them.

The presentation of the promotional book was held on 21 February of 2018, coinciding the International Mother Language Day, in the Alisher Navoiy National Library of Uzbekistan. The National Commission of Uzbekistan invited ICH bearers, experts, project researchers, and representatives of respective governmental and non-governmental organizations. Moreover, the following officials took part in the presentation of the book: Mr. Badarch Dendev, Acting Head of the UNESCO Office in Tashkent; Mr. Dmitriy Voyakin, Director of IICAS; Mr. Mosud Mannan, the Ambassador Extraordinary and Plenipotentiary of the People’s Republic of Bangladesh; Mr. Alisher Ikramov, Secretary-General of the National Commission of the Republic of Uzbekistan for UNESCO; and Ms. Umida Teshaboyeva, Deputy Director of the Alisher Navoiy National Library of Uzbekistan. Also in attendance were representatives of the Korean and other embassies. The project curators produced 500 copies of the atlas in English and 1,000 copies in Uzbek.