Appreciating the Traditional Music of the Maldives through Bodu Beru 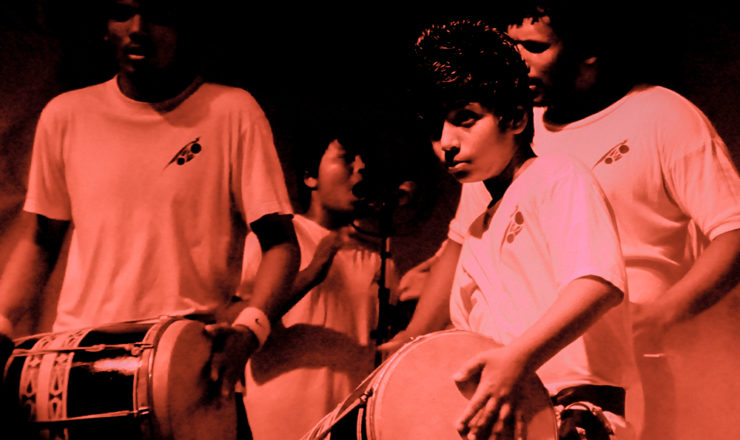 Bodu beru (literally “big drum”) is the most popular and one of the oldest surviving forms of music and dance in the Maldives. The tradition is thought to have been brought to the Maldives by African slaves in the nineteenth century. Some people also believe that it evolved as an alternative to eleventh-century court music.

Bodu beru is usually performed by a group of fifteen to twenty people—composed of at least a lead singer and three drummers. Goat skin is commonly used as the drum’s membrane and the wood of coconut palm as the drum’s barrel; stingray skin is also used as a substitute for goat skin. The beat is hammered out with bare hands in a slow tempo, building up into a crescendo. This intensity continues before reaching an abrupt end. The song accompanying this drumming is called baburu lava or negro song. In the olden days, the lyrics were a meaningless combination of local and African words usually sung after a hard day’s work.

Nowadays, songs sung with bodu beru accompaniment are written in Dhivehi, the local Maldivian language. During musical shows, performers render a dance called baburu neshun or negro dance while wearing a sarong and white short-sleeved shirt. Bodu beru is popular at weddings, Eid occasions, and events held in relation to the circumcision of young boys. Also, with many tourist resorts realizing the commercial benefit of a relatively inexpensive cultural activity for their tourists, many bodu beru groups have been formed to perform in resorts. A current and more commercial revival has been led through an annual reality show/competition known as Boduberu Challenge. Some videos of the program are available here.