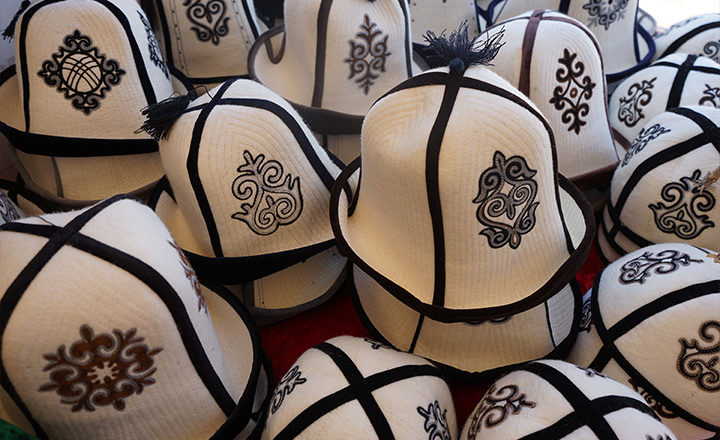 Inscribed in 2019 (14.COM) on the Representative List of the Intangible Cultural Heritage of Humanity

Ak-kalpak craftsmanship is a traditional Kyrgyz handicraft. The ak-kalpak is a traditional male hat made with white felt that bears deep sacral meanings. Ak-kalpak craftsmanship is a cumulative, ever-evolving body of knowledge and skills passed down by craftswomen in the communities concerned comprising felting, cutting, and sewing and pattern embroidery. Related knowledge and skills are transmitted via oral coaching, hands-on training, and joint making in workshops. More than eighty kinds of ak-kalpak can be distinguished and decorated with various patterns bearing a sacred meaning and history. Environmentally friendly and comfortable, the ak-kalpak resembles a snow peak with four sides representing the four elements: air, water, fire, and earth. The four edging lines symbolize life, with the tassels on the top symbolizing ancestors’ posterity and memory, and the pattern symbolizing the family tree. Ak-kalpak unites different Kyrgyz tribes and communities and makes Kyrgyz people recognizable to other ethnic groups. It also fosters inclusivity when representatives of other ethnic groups wear it on holidays or days of mourning to express unity and sympathy. There are workshops all over the country where related knowledge and skills are passed down, and in 2013, a project entitled From Generation to Generation was conducted on traditional ak-kalpak-making techniques nationwide, resulting in an exhibition and a published book.