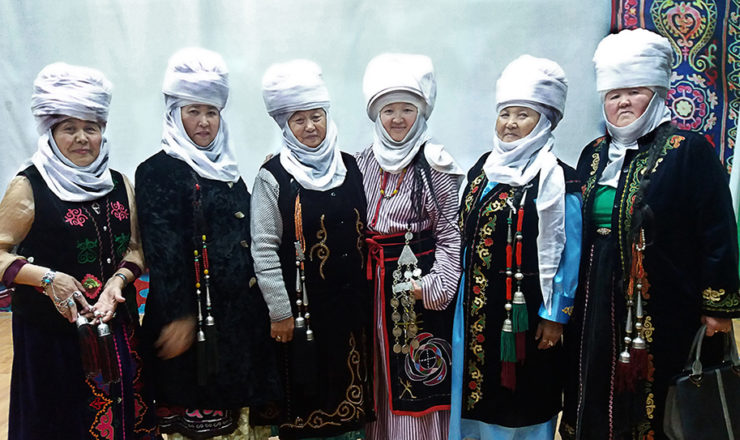 Two festivals of ak-elechek (or elechek) took place in Kyrgyzstan in March 2017. One of them was held at the national scale; one thousand women from all provinces wearing ak-elechek participated in the event in the nation’s capital, Bishkek. The second event took place in Talas, a small northern province, where women made eighty-six elechek models.

Ak-elechek is a traditional white Kyrgyz female turban, made of many layers of a single piece of cloth. The material (silk, wool, or cotton), number of turban layers, and its model depend on the age, social, and marital status of women.

In the past, a young woman would put on an ak-elechek for the first time when going to a prospective husband’s house, and then, after the marriage ceremony, the woman had to wear ak-elechek at all public events. In emergencies, Kyrgyz women would sometimes use ak-elechek during unexpected births or for wounds or trauma. A widespread traditional blessing, “Don’t let your white ak-elechek fall down from a head,” is a wish for lifelong family happiness.

One thousand women in ak-elechek in Bishkek and eighty-six women in Talas impressively gathered to promote Kyrgyz traditional values and recall the important roles women in society. Women of different ages and social statuses from all regions of the country participated in the national and regional festivals. Events were organized by the public association Kyrgyz Tilekteshtigi (the Kyrgyz Cooperation) and by the Kiyiyz-Duino – Kochmon Rukhu (Felt World – Spirit of Nomadism) Fund.