A Look into Jeju: Living in Harmony with Nature 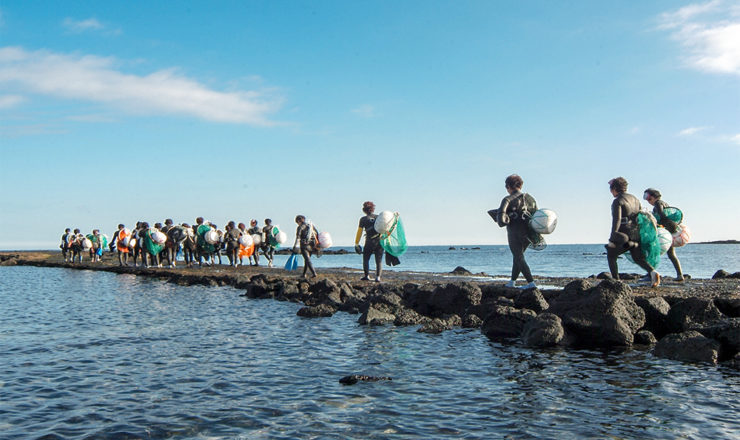 Jeju is a volcanic island filled with stones. Previous eruptions have produced volcanic bombs (large volcanic rocks) scattered around, covering the whole island. This is why it is difficult to cultivate crops in Jeju. Since the thirteenth century, the people of Jeju have been making stone walls to secure farmlands. The total length of stone walls is estimated at 22,100 km. These stone walls look like they are heaped up randomly. However, Jeju people’s wisdom is time-tested, unassumingly sturdy, hidden in those walls. Because the island is prone to strong winds all throughout the year, taking note of typhoons in the summer, they built the stone walls like roughly-heaped stones with holes to let the wind pass through, weakening the possibility of structural collapse.

Tamna is Jeju’s old name. The beginning of Tamna is illustrated by Samseong myth. Legend has it that three demigods emerged from holes in the ground. The ground is called samseonghyeol, which is still considered as a sacred place. The emergence from the ground shows difference in cultural archetype from the birth myth of the mainland involving the egg from the heavens. There are 18,000 gods and goddesses in Jeju. Jeju people believe that god lives in everything. Such belief is shaped by Jeju’s naturally difficult tendencies. As people in Jeju battle with endless wind and water shortage due to the island’s barren volcanic environment, they rely on gods to adapt to the roughness of Jeju.

There are Bonhyangdang Shrines, the house of gods protecting people’s livelihoods. simbangs (shaman in Jeju dialect) act as intermediary between Jeju people and gods. They perform yeongdeunggut in the second lunar month for haenyeo (female divers) and fishermen who depend on the sea for a living. The Yeongdeung is the goddess of the wind, who can raise the waves, which is why she is deemed important for the safety of people pursuing the sea. Jeju Chilmeoridang Yeongdeunggut, the representative yeongdeunggut in Jeju, was listed as an Intangible Cultural Heritage of Humanity of UNESCO in 2009. There are many other rituals for gods and goddesses of the sea, which are held in roughly 30 areas in Jeju during the same month. There are many stories related to goddesses in Jeju. Different from goddesses in other countries, Jeju goddesses neither depend on nor belong to gods. This is a characteristic shown by Grandmother Seolmundae, the giant who created the island by carrying soil in her skirts; Grandmother Samseung, the goddess of babies; and Jacheongbi, the goddess of farming. Jeju women have high self-esteem unlike those in patriarchal East Asian societies following Confucian teachings. They also participate in the economy more actively than their counterparts in other regions in Korea. Jeju haenyeo is a representative example of women’s participation in the economy. In 2016, the Culture of Jeju Haenyeo was inscribed on the Representative the List of the Intangible Cultural Heritage of Humanity by UNESCO during the eleventh Session of the Intergovernmental Committee for the Safeguarding of the Intangible Cultural Heritage in Addis Ababa, Ethiopia. It shows matriarchal characteristics of Jeju. In Jeju where the soil is not fit for rice farming, many women became divers to find food from the sea and learned how to cooperate with each other.

Despite the unique challenges in the island, Jeju people have used nature without destroying it, depending on 18,000 gods and neighbors. Such characteristics form the core of the Jeju culture.