A Look into Jeju: Jeju and World Natural Heritage 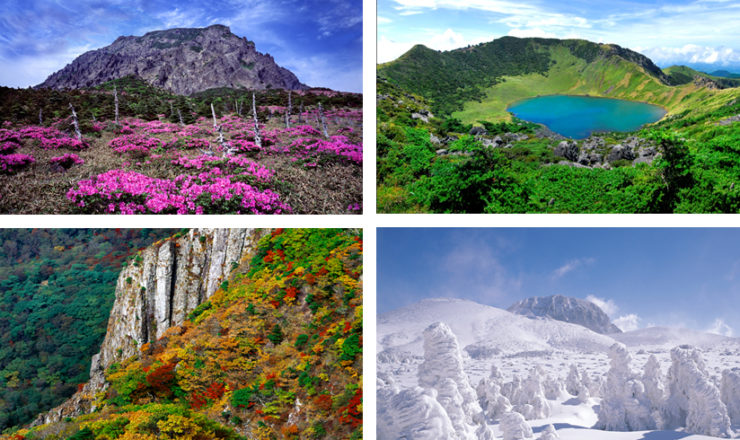 Jeju Island or Jeju Do was formed from volcanic eruptions that lasted from 1.8 million to a few thousand years ago. The island has a diverse and unique volcanic landform, earning its nickname as “a museum of volcanoes.” It is a repository of biological resources, as it is home to 2,000 plant and 5,000 animal species on Mt. Halla and in other areas. Jeju’s environmental value was globally acknowledged when it was listed as a UNESCO World Natural Heritage Site in 2007. The island is now “a treasure island of environmental assets” for the whole world to appreciate and protect.

UNESCO designates places of “Outstanding Universal Value” as World Heritage. The 2007 listing for Jeju Island was the first such site in Korea and is listed under the official title “Jeju Volcanic Island and Lava Tubes.” Among four natural criteria for selection (scenic value, geological features, biodiversity, and ecological value), Jeju was acknowledged for its significant scenic value (vii) and significant geological value (viii). The designated sites are Hallasan Natural Reserve, Seongsan Ilchulbong Tuff Cone, and the Geomun Oreum Lava Tube System, covering a total area of 188.45 square kilometers (Core Zone 94.75, Buffer Zone 93.70), accounting for about 10 percent of the island.

Mt. Halla is the symbol of Jeju Island and the central peak of a shield volcano rising 1,950 meters above sea level. It was designated as Natural Monument No.182 in 1966 and a national park in 1970. The mountain has various volcanic landforms, including the Baengnokdam Crater Lake at the summit, the steep cliffs of Yeongsil Giam, many oreums, and a network of lava tubes. Mt. Halla is a habitat for various species. In particular, the forest of the Korean fir (Abies koreana), at an altitude of 1,400 meters, or higher is uniquely valuable as the only pure forest in the world.

Seongsan Ilchulbong Tuff Cone was formed when hot magma rose to the surface and interacted explosively with water 5,000 years ago. This 180-meter-high tuff cone has a crater about 600 meters in diameter, and as a result of thousands of years of erosion, it has the shape of crown. For such reasons, Seongsan Ilchulbong Tuff Cone has a well-preserved volcanic edifice since the hydromagmatic volcanic eruption, clearly displaying the sedimentary layers of volcanic ash. For a long time, it has been the first of the ten most famous scenic views at sunrise, drawing millions of tourists every year.

Geomun Oreum Lava Tube System refers to a series of lava tubes that were formed by the flow of lava from a small volcano called Geomun Oreum to the beach in the northeast direction (for about 14km). Among the caves, Bengdwigul, Manjanggul, Gimnyeonggul, Yongcheondonggul, and Dangcheomuldonggul were designated as World Natural Heritage Sites. The caves have significant scientific value due to the excellent preservation of its internal structure and topographical features, given its age of formation hundreds of thousands of years ago. In particular, Yongcheondonggul and Dangcheomuldonggul are recognized as the most beautiful lava tubes in the world, as they boast a magnificent view with carbonate speleothems, which are common in limestone caves.