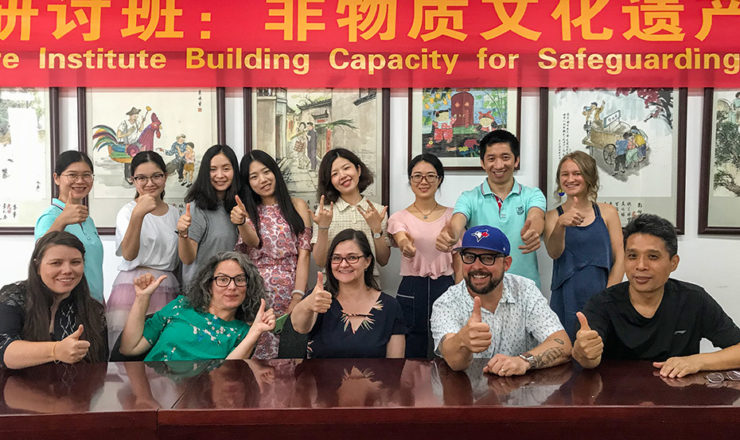 From 12 to 19 July, the 2019 Summer Folklore Institute: Building Capacity for Safeguarding Intangible Cultural Heritage was held in Guangzhou, China. The institute was co-hosted by the Institute of Chinese Intangible Cultural Heritage at Sun Yat-sen University and American Folklore Society (AFS), assisted by the Chinese Language and Literature Department of Sun Yat-sen University and China Folklore Society, and was sponsored by the Henry Luce Foundation and China Ministry of Education.

Since the first Summer Institute held in 2016, these events have been held four times at venues in both China and the United States. The purposes of the 2019 Institute were to provide focused classroom and field learning experiences, to introduce the local culture of Guangzhou, to educate participants about capacity building for ICH and relevant practices carried out in China and the US, and to help the participants build relationships with institute colleagues.

The opening ceremony was held on 13 July. Executive Director Jessica Turner of the AFS, Professor Chao Gejin, and Professor Ye Tao delivered speeches that reflected upon the academic communication and friendship between the China Folklore Society and the AFS and its contribution to the development of academic cooperation and discipline over the last decade. Professor Song Junhua traced the historical development of folklore in Sun Yat-sen University, introduced the history of cooperation between Sun Yat-sen University and the AFS, and briefed the exploration that Sun Yat-sen University has made on the construction of the ICH discipline.

As the first faculty to present, Prof. Gejin reviewed the history of the development of capacity at the national level, pointing out that the present focus on capacity building is aimed at strengthening the capacity of global safeguarding of ICH. He also highlighted the in-depth report by the Intergovernmental Committee for the Safeguarding of Intangible Cultural Heritage and the Global Higher Education Network, and introduced the trend of UNESCO’s global capacity building.

Professor Wang Xiaobing delivered a speech about marketing and industrial standardization of ICH products and shared two cases she surveyed to illustrate that industrialization and standardization not only bring economic benefits to the inheriting persons and community but can also strengthen their cultural consciousness to guarantee the continuing ICH development in local society. Patricia Ann Hardwick introduced the situation regarding the safeguarding of Mak Yong in Southeast Asia. As dance-based drama once performed for entertainment and at healing ceremonies, Mak Yong is a symbol of Malay culture but it is also shared by Indonesia. The ICH safeguarding discourse thus has to contend with Malay ethnic nationalism and political Islamic movements in Malaysia.

Tyrie Smith, Director of Foxfire Museum and Heritage Center in Georgia, discussed Foxfire’s history as a student-led, community-based cultural journalism project and how it evolved into a museum and heritage center informed by the work of students in their community. Smith also shared descriptions of the operating experience.

Dr. Michelle L. Stefano provided a brief history of public folklore at national level, examining the ethical issues that should be considered when approaching safeguarding and promoting ICH. Dr. Stefano concluded that we should reframe the framework and recognize people’s autonomy as decision makers in their own right. Professor Liu Xiaochun took the local ICH Shawan Piaose as an example and highlighted that its heritagization is a result of the efforts of multiple actors such as governments, organizations, individuals, media, and scholars.