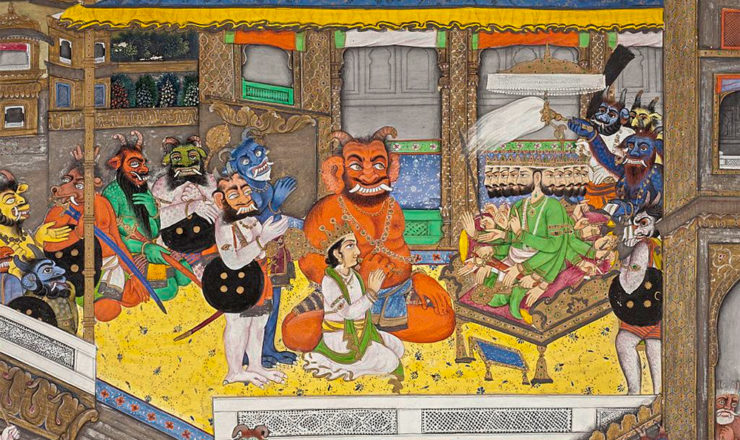 Lakshmana at Ravana's Court, Folio from a Ramayana

The Ramayana Festival was held in six Indian cities—namely Delhi, Ayodhya, Lucknow, Kolkata, Hyderabad, and Ahmedabad from 20 to 26 January 2018 coinciding the celebration of the twenty-fifth year of ASEAN-India Dialogue. The Indian Council for Cultural Relations (ICCR), which has been hosting the International Ramayana Festival every year, also organized the festival.

Ramayana, an ancient Indian epic poem, narrates the struggle of the divine prince Rama to rescue his wife Sita from the demon king Ravana. It is a popular theatrical theme and a significant cultural heritage in the Eastern world. Thus, this cultural event was designed to demonstrate cultural and emotional bonds among ASEAN countries and India through the epic. In fact, this festival was suggested by Cambodian Prime Minister Hun Sen at the ASEAN-India summit in Manila last November as he held the epic as a potent symbol of integration of the Southeast Asian region with India. New Delhi worked with embassies of the ten ASEAN countries to draw participation from top artists in the field of traditional musical performance.

Throughout the festival, artists showcased cultural interpretations of the epic on the stage of Kamani Auditorium every night in the capital’s first cultural district of India. From 20 to 24 January, teams from Thailand, Myanmar, Malaysia, Lao, Singapore, Indonesia, Cambodia, Vietnam, the Philippines, and Brunei performed on stage one by one. It is a culturally significant event as it provided a chance to witness ten versions of an epic that has been traditionally transmitted by each country in its own way. More information about the event is available on the ICCR website and on private websites, including Delhi Events.