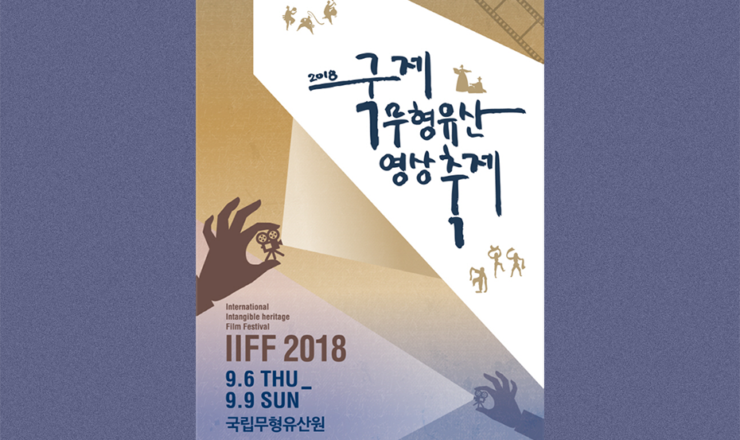 The fifth edition of International Intangible Heritage Film Festival (IIFF) will be held from 6 to 9 September in Jeonju, Korea. The IIFF is the only Asian film festival that focuses on intangible heritage. Grounded on the slogan, “Dreams Made by Hands” (Su-mong, in Korean), craftsmanship (somssi) is at the core of the film festival this year.

The festival program mainly includes twenty-seven heritage films from fifteen countries in four categories. The official IIFF selection category combines older masterpieces with brand new films, including fiction feature films, documentaries, and animation as a non-competition section. Three classic and five new films were selected to see dreams and hopes through cultural heritage. Arirang: Masters category explores what intangible heritage means in contemporary society. It will be accompanied by Cine Talks to give a chance to talk with directors, performers, and writers. IIFF Short Films program collaborates with Singapore Heritage Short Film Festival to screen five short documentaries and a short animation, collectively giving a portrayal of cultural heritage as an important aspect of Singaporean society and family.

Best of the Fest, the main thematic focus program, introduces short documentary series about Japanese artisans to record the hidden intangible heritage across the Asia-Pacific region. On 7 September, ICHCAP will introduce four selected films on somssi of Kyrgyzstan and Kazakhstan (two for each country) among the fifty films produced through the ICH video production project in Central Asia . The Kyrgyzstan National Commission for UNESCO and the Embassy of the Republic of Kazakhstan in Korea will provide commentary before screening. During the festival, other films on Central Asian ICH will be screened at the Eolssu Maru lobby.

For this year’s IIFF, the organizers have selected diverse films so that Korean and international audiences will find a certain degree of relevance and familiarity with the entire festival program. The opening film, The Lady in Number 6: Saved My Life, is a 2013 Academy Award-winning documentary-short film. This is about how Alice Herz Sommer, the world’s oldest pianist and a Holocaust survivor, persisted to have a long and happy life, overcoming frustrating memories through classical music.

Furthermore, the IIFF official selection is not short of various films, including Farewell My Concubine, which the Chinese have loved, La Chana showing the passion of a famous Flamenco dancer, and Little Forest: Summer and Fall, which is about Japanese traditional gastronomy. Arirang: Masters category includes the Korean fiction feature The Royal Tailor, the Korean documentaries Becoming Who I was, Intangible Asset Number 82, and Dancing with Jikji, and the Pixar’s animation, Coco.

During the IIFF, three archive films, recorded and produced by the National Intangible Heritage Center, will be screened in the evening on the courtyard. Through this screening, the audience will enjoy a cultural atmosphere in autumn night, unveiling an opportunity to witness the value of heritage.

The festival prepares various cultural events for the audience and visitors. On the opening ceremony, a special performance by Oh Jung-hae, a Korean traditional musician and actress, will be shown. Her plays will be mixed with moving images about intangible heritage artisans. On 9 September, there will be a special lecture with Cho Seungyeon, a special writer in humanities and world history, after Coco’s screening.

Pri Jeongak and Daechita performance, a Korean traditional military band with a pipe, conical oboe, and the traditional instruments, will parade from Jeondong Catholic Church to the National Intangible Heritage Center on 8 September at 4pm. On the same day, Gangangsullae interactive performance will run so visitors can join the circle dance under the moon.