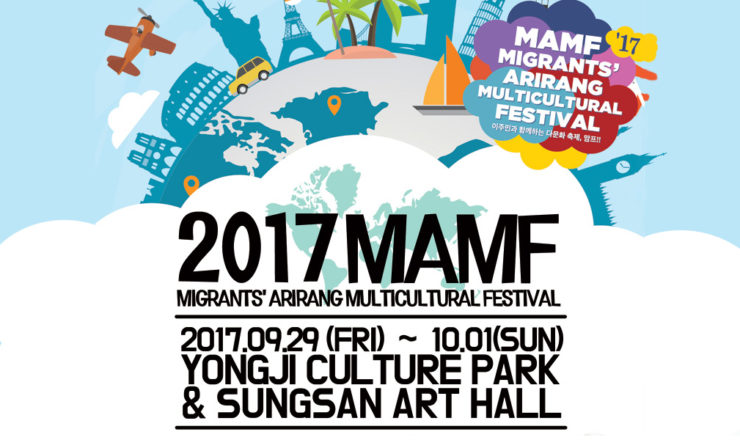 The 2017 Migrants’ Arirang Multicultural Festival (MAMF) will be held from 29 September to 1 October at Yongji Culture Park and Sungsan Art Hall in Changwon, Korea. The MAMF has been held each year since 2005 to become the largest multicultural festival in Korea. The festival aims to encourage mutual acceptance and development by protecting cultural rights of migrants and providing local communities with an opportunity to experience and understand various cultural perspectives. Under the theme “Global Culture Road,” this year’s festival will provide diverse cultural events involving 14 countries at the downtown of Changwon.

The MAMF selects the guest-country of honor each year to introduce the country’s culture in detail. As Bangladesh has become the guest of honor this year, its Minister of Cultural Affairs and Bangladesh Shilpakala Academy (under the control of the Ministry of Cultural Affairs) will participate in the festival. The Academy is scheduled to provide traditional Baul song and folk dance performances inscribed on the UNESCO’s Representative List of the Intangible Cultural Heritage of Humanity. Last year, the Royal Ballet of Cambodia, also known as Khmer Classical Dance, performed the Apsara Dance, a traditional dance also inscribed on the UNESCO’s Representative List.

There will be various events over three days, in which migrants will introduce and enjoy their traditional culture. At the Migrants’ Arirang event hall, visitors can enjoy each country’s traditional dance and instrument performances, folk games, crafts exhibition, and artist concerts. Migrants from thirteen countries will have a parade dressed in traditional costumes to introduce their unique culture to visitors and local residents. The parade of thousands of migrants in traditional costumes and with signs on the central street will be the climax of the festival.

Other events such as Migrant Song Festival and Asia Pop Music Concert will also bring migrants and local residents together and enable visitors to see a great harmony of traditional and modern culture. Admission to the festival is free of charge. Please visit its website for more information.