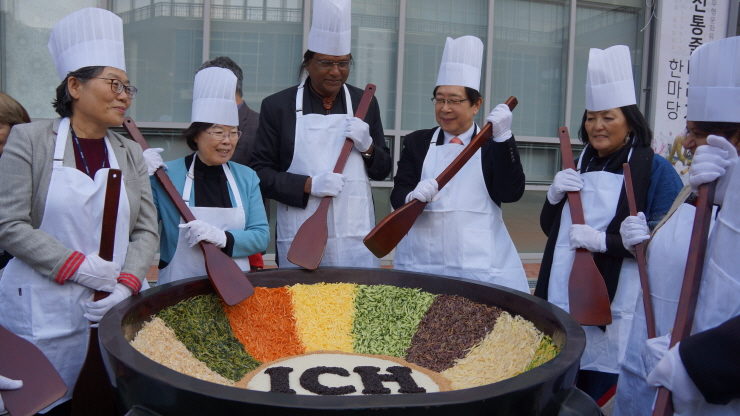 About fifty NGO representatives from thirty states in the Asia-Pacific region and two hundred Korean participants attended the conference to discuss the contribution of ICH to the sustainable development of humanity.

Dr. Amareswar Galla, Executive Director of the International Institute for the Inclusive Museum, gave a keynote speech, which was followed by topic presentations by Ms. Beatrice Kaldun and Mr. Antoine Gauthier, Director of Quebec Council for Intangible Heritage. The speakers showed how culture is better represented by the SDGs than it was in the previous MDGs, which did not consider culture as a driver of development. The speakers also highlighted ways that ICH, which broadly includes traditional knowledge, craftsmanship, and other broad domains, contributes to the sustainable development of humanity and the important role of NGOs to reach out in areas that governments cannot.

The first afternoon was dedicated to topic presentations and case studies. The topic presentations were about how ICH can contribute to sustainable development, and the case study presentations were manly dedicated to two themes—education and community empowerment. In these sessions, participants shared their activities on promoting community-based ICH education and transmission, raising awareness about ICH, and working for community empowerment through traditional craftsmanship. The presenters spoke about how urbanization, industrialization, and climate change make it difficult to maintain and transmit ICH. Nevertheless, they also showed how maintaining and developing traditional knowledge and skills can lead to economic benefit and strengthen the identity of community. The speakers were also quick to remind us that ICH should not be a matter of simply following traditions but should be applicable to daily life and that the key of connecting the past and the present is in applicability. They also noted the importance of both NGOs and governments to continuous education and transmission of ICH.

The second day of the conference was made up of four group sessions under different themes: forming discourse on ICH safeguarding; education and awareness raising; urban renewal and community development; and cultural industry and sustainable tourism.

The first group session was co-organized by the Center for Intangible Culture Studies. Most of the participating NGOs—Center for Intangible Culture Studies, Shejun Agency for Bhutan’s Cultural Documentation and Research, Center for Research and Promotion of Cultural Heritage, The Folklore Society of Japan, China Folklore Society, Memória Imaterial, and Homer2000—are active in the field of research and documentation. All participants agreed that the 2003 Convention should guide the activities of NGOs and that the newly adopted ethical principles for safeguarding ICH should be referred to.

The second group session was co-organized by the Jeonju Cultural Foundation. The participating organizations—National Wayang Secretariat, Cambodian Living Arts, Waa’gey, Arts Council of Mongolia, Island Ark Project, George Town World Heritage Incorporated, World Martial Arts Union, Music for One Foundation, and Traditional Arts Association—are active in ICH education and transmission activities. The speakers agreed that the community should have leadership and initiative in ICH education and transmission processes to avoid de-contextualization because ICH has value when it transmitted in daily life and not treated like a relic in a museum, which supports the notion that ICH and its value are better transmitted through non-formal education and explains why local communities and NGOs are important in non-formal education process.

The third group session was co-organized by the Jeonju Social Economy and Urban Regeneration Support Center. The participating NGOs—banglanatak.com, Nagorik Uddyog, Merijanmbhumi, Indian Institute of Social Sciences and Folklore Research, International Women and Family Foundation, and Adda Creative Arts Association—shared their activities on community development through ICH. The speakers showed how ICH can vitalize the local community, raise community income, and integrate and empower marginalized people in their community. They also agreed that community empowerment is a prerequisite to vitalize ICH.

The last group session, co-organized by the Korea Traditional Culture Center, was on the cultural industry and sustainable tourism. The participating organizations—Central Asia Crafts Support Association’s Resource Center, AJIYER Fair Trade Limited, Tiapapata Art Centre, Taman Mini Indonesia Indah, National Commission of Uzbekistan for UNESCO, Korea Cultural Heritage Foundation, Hanok Village Global Forum, and Jeonbuk Culture and Tourism Foundation—discussed how to recreate and popularize traditional craftsmanship without destroying the meaning and value of their elements. While they agreed that de-contextualization and commercialization should be avoided, they did admit that commercialization does not always have negative effects and can contribute to the promotion of ICH.

On the final day of the conference, each group session was summarized and the conference wrapped up with a group discussion. The participants reaffirmed the important role of ICH in the sustainable development of humanity and committed to continuing their efforts to safeguard ICH and maintain their network to share experiences. As a result of the conference, ‘Declaration of the 2016 Asia-Pacific ICH NGO Conference’ was adopted.

ICHCAP hopes that the conference enhanced the capacities of NGOs while contributing to more active ICH safeguarding by discovering and publicizing a wide range of specific case studies illustrating the relationship between ICH and sustainable development.